What Is Leaky Gut? 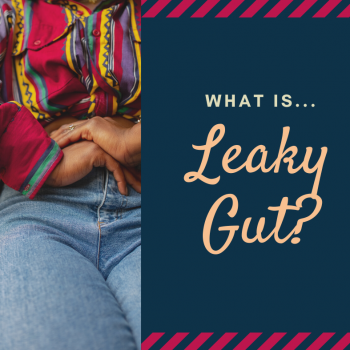 ‘Leaky gut’ is a term that has been used online and in various forums or health magazines for many years, however it is more correctly referred to as ‘increased intestinal permeability’.

Whilst increased intestinal permeability is not a ‘diagnosable condition’, it is widely recognised in the scientific literature as a factor that can contribute to a wide range of symptoms and medical conditions. Before we explore this however, it’s important to understand what intestinal hyper-permeability is.

What is Increased Intestinal Permeability?

In the healthy gut, the intestinal wall is designed to allow nutrients from the digestive tract through into the bloodstream, whilst keeping microbes, bacterial by-products, inflammatory compounds and other undesirable substances from crossing from the gut into the body system. This passage of nutrients largely takes place through very small gaps in the intestinal wall known as tight junctions.

Certain substances, bacteria, medications and nutritional deficiencies are known to impair the function of tight junctions, leading to intestinal hyper-permeability. In such cases, the integrity of the gut wall is compromised, resulting in increased ‘permeability’ and thus potentially facilitating the passage of such substances through the gut wall and into the bloodstream. Essentially, increased intestinal permeability can be thought of as intestinal barrier dysfunction, hence the old term ‘leaky gut’.

There are a multitude of factors that can contribute to or cause increased intestinal permeability and therefore each individual requires case-by-case approach. These can include:

What is Increased Intestinal Permeability A Problem?

Increased intestinal permeability has been associated with a wide range of symptoms and medical conditions, including local responses in the digestive tract, as well as more ‘systemic presentations’.

‘Locally’, intestinal hyper-permeability may present with symptoms such as bloating, digestive disturbance, food sensitivity reactions and IBS-like symptoms. On a more systemic level, its presence has been implicated in the pathogenesis of conditions such as inflammatory bowel disease, autoimmune conditions (such as Hashimoto’s disease, rheumatoid arthritis, and type I diabetes), as well as food allergies, inflammatory conditions and chronic fatigue syndrome.

For example, researchers have suggested that increased intestinal permeability may predispose individuals to autoimmune disease, via abnormal activation of the immune response – essentially, the passage of inflammatory compounds from the gut into the bloodstream may trigger a dysfunctional immune response, in which the body mistakenly attacks its own tissues (whether that be the thyroid, the joints or another tissue entirely). Whilst researchers are well aware of this connection, further research still needs to be done in order to fully understand the mechanisms linking barrier defects with autoimmunity and systemic inflammation.

Can We Assess for Increased Intestinal Permeability?

The first step to promoting a healthy intestinal wall is to address and correct any of those factors above that might be contributing to increased intestinal permeability – whether this is regular alcohol consumption, NSAID-use, a high sugar diet or general microbial dysbiosis. After such factors have been accounted for, we can then look at correcting potential nutritional issues that might be exacerbating the problem and/or using nutritional supplements that have been researched specifically for their role in supporting intestinal barrier function. In particular, nutrients like zinc, vitamin A, quercetin, glutamine, N-acetyl-glucosamine and certain strains of probiotics have all been shown to improve intestinal integrity and reduce intestinal permeability, and thus your naturopath can work with you to devise a plan in which such compounds can be used in therapeutic forms and doses to correct the issue. Importantly, you should never supplement such supplements without the advice of a suitably-qualified healthcare practitioner, so they can take into account factors such as your age and weight (for dosing purposes), the type and form of nutrients used, the timing of supplementation, potential drug interactions, any allergies or sensitivities you might have, and whether a supplement is suitable for you given your clinical history.