Mobile Phone Radiation – Should You Be Concerned? 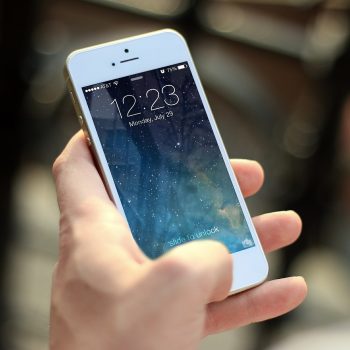 There’s no doubt mobile phones have revolutionised everything from the way we communicate to each other, to how we order food, play games, take photos, find directions and even make payments. Mobiles are so ubiquitous in Australia, that in 2015, it was estimated there were 31 million active mobile phone accounts in Australia, despite a population of around 23 million. With the rise in mobile phone use however, there has been increasing concern over the safety of these devices, in particular, with respect to mobile phone radiation.

How Do Mobile Phones Affect Your Health?

Not only has mobile phone use been linked to sleep disturbance and altered brain activity, but in 2011, the World Health Organisation’s International Agency for Research on Cancer declared the type of radiation emitted by mobiles as a ‘possible carcinogen’. This announcement came as a result of increasing evidence suggesting a correlation between long-term mobile phone use and brain tumours (specifically, gliomas and acoustic neuromas).

Studies also suggest mobile phone exposure may detrimentally affect reproductive health, particularly in men who carry their phones in a pocket or attached to their belt. Cell phone radiation has been linked to reduced sperm count and motility, as well as higher levels of oxidative stress, DNA damage and changes in sperm morphology. In one particular study, men who spoke on a mobile for more than an hour per day had, on average, 17% fewer highly motile sperm, than those who talked on a phone for less than 15 minutes per day. Similarly, those who carried a phone in their pants pocket had 11% less motile sperm than those who didn’t. These effects can make it increasingly difficult for couples to conceive as not only is the number of viable sperm cells reduced, but those remaining may not swim properly and can contain damaged DNA. Among these studies, the extent to which sperm was affected was largely dependent on a man’s overall daily mobile phone exposure, as well as whether or not he carried his phone below waist level. Unfortunately, at this stage, scientific understanding of the effect of mobile phone use on female reproductive health is limited.

So What Can We Do About Mobile Phone Radiation?

Mobile phones, Wifi routers and wireless devices give off a type of non-ionising radiation called radiofrequency energy, a type of electromagnetic radiation. This radiation is emitted when a signal is transmitted outward towards a mobile phone tower, such as when making a call or sending a text message. Even when the phone on, but idle, a small amount of radiation is always produced. When reception is poor, the phone has to work harder to connect to the mobile phone tower, meaning more radiation is produced. For this reason, using a phone in an elevator, on a moving train or in a low reception area can be more detrimental to your health. Some phone cases also block the internal antenna of the phone, meaning the phone has to work harder (and thus produce more radiation) to transmit the signal.

Phones also give off more radiation when making a call, so where possible, it’s better to send a text. If you must speak on the phone, use speaker or some earphones. The further the phone is away from your body or head, the less radiation you are exposed to.

Scarily, children absorb significantly more mobile radiation than grown adults, as their skull bones are thinner, and therefore provide less of a protective barrier. For this reason, experts suggest parents should limit their children’s mobile phone, and encourage texting or using the speaker function where possible.

Over our lifetime, it is likely we will be exposed to mobile phone radiation on an increasing basis, as mobiles, wireless devices and public WiFi become more pervasive in our modern society. For this reason, we recommend keeping your phone on flight mode at night, and switching off your WiFi router until the morning. Think about it – by switching off for just 8 or so hours while you sleep, you can reduce your overall exposure by up to a third!

In addition to these recommendations, the Environmental Working Group has some fantastic resources and articles discussing the research on mobile phone safety, as well as suggestions to help you minimise yours and your family’s exposure (we’ve included some of these links below). We particularly like this ‘infographic’ HERE, which you can download as a quick reminder of the steps you can take to minimise your exposure.

Some More Resources For You 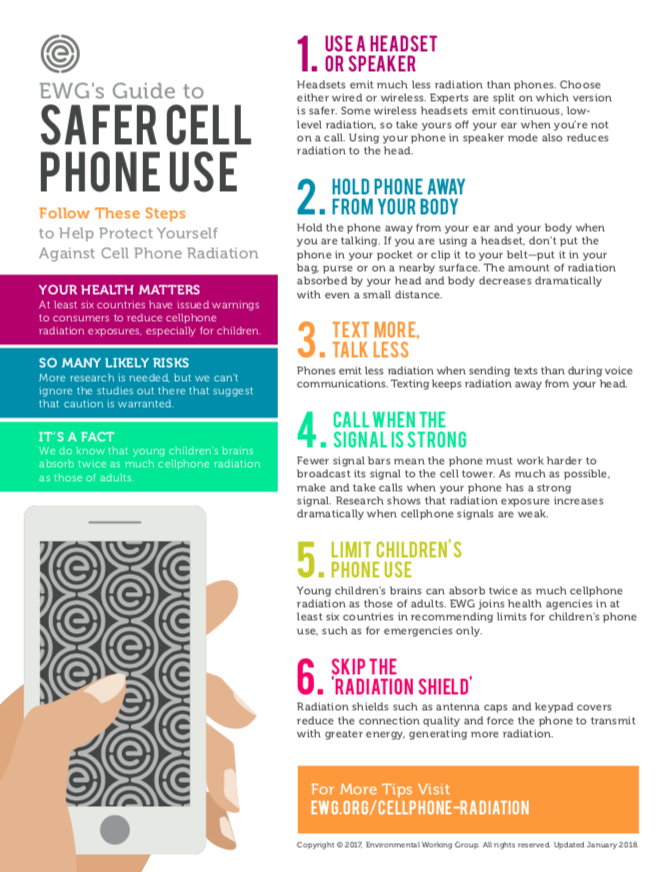